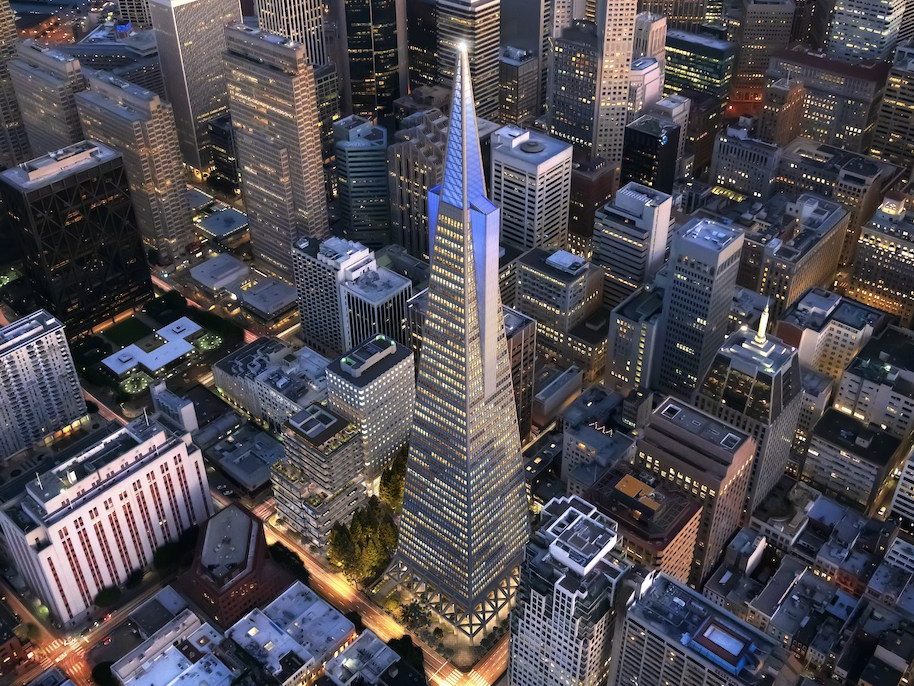 In addition to the iconic Transamerica Pyramid Tower, the office redevelopment project will also encompass the adjacent building – for which an additional $150 million has been earmarked – and historic Redwood Park. SHVO announced its decision to hire Foster + Partners after a selection process that included international companies Bjarke Ingels Group and David Chipperfield Architects.

Designed by futuristic architect William Pereira, the 48-story Transamerica Pyramid opened in 1972. The property totals 763,000 square feet, including the two adjacent office buildings that were completed in 1930 and 1981.

Foster + Partners’ redesign aims to tie the three buildings together with ground-level upgrades and additions. The Transamerica Pyramid will undergo a complete interior renovation, with the stated goal of creating upscale, wellness-focused office spaces that appeal to today’s flexible nature of workspace demand. Retail spaces will be added throughout, while the middle two floors will include lounge and conference facilities. The top floor will house a private bar and lounge.

Focus on the public and the community

The Transamerica Pyramid is located at 600 Montgomery Street. At street level, the developer aims to enrich the area with landscaping that will revitalize public and community life. Redwood Park, which has nearly 50 mature redwood trees, will benefit from these improvements, while the east lane of Sansome Street will see the addition of plum blossoms, cafes, shops and restaurants.

The office tower currently offers separate floors ranging from 3,000 to 20,000 square feet. In 2019, the building was certified LEED Platinum. Current tenants include Northwestern Mutual, CORE, Callan Associates and Sterling Bank & Trust, among others.

The Pyramid Center has only been traded once since it was built. According to CommercialEdge, SHVO acquired ownership of three buildings in 2020 in a $650 million deal from Aegon USA Real Estate Advisors.

The aftermath of the global crisis has accelerated the flight to quality phenomenon in office markets, according to the latest CommercialEdge report. In San Francisco, more than 5.2 million square feet of office space was in progress in February, representing 3.3% of total inventory.

Another block-sized project in the financial district was announced late last year. Hines’ multi-tower redevelopment for the old Pacific Gas and Electricity Headquarters are currently underway on Mission Street, after the property was traded for $800 million in September.

Manitoba moves forward with school tax rebate, despite opposition to payments to…