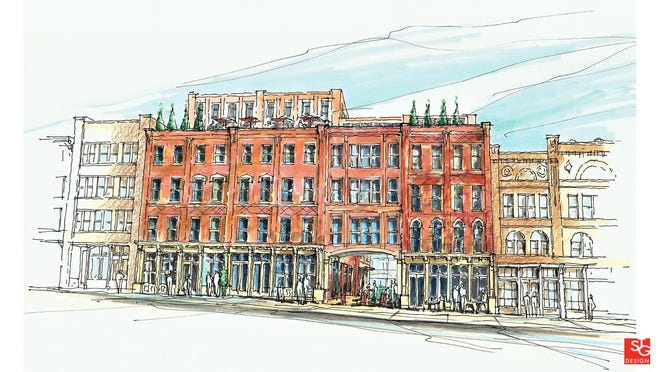 A new redevelopment proposal for four historic Second Avenue buildings devastated in a bomb explosion on Christmas Day in Nashville would connect the riverside street while trying to preserve as many historic architectural features as possible .

The proposal includes new buildings in the easements along the historic block that could reach six stories, as well as amenity terraces on the roof. The owners also aim to reconstruct the original facades of the brick building using materials recovered from the rubble.

The plans would create a “pedestrian mall” in the middle of the cluster of four buildings by removing the old building at 172 Second Ave, much of which was razed to the ground by the explosion.

Project architect David Johnston of STG Design presented the proposal and the new renderings to the metro planning committee meeting on Thursday.

Over the past nine months, crews have painstakingly salvaged pieces of the facade of Second Avenue from mounds of debris. Salvaged cast-iron columns, stone lintels, window covers, building cornices and other materials would be used to recreate the buildings’ historic facades as much as possible, Johnston said.

Inside, the owners hope to keep as many masonry walls intact as possible and use original artifacts taken from damaged buildings, including a salvaged fireplace mantel and weigh station.

Crumbling walls that were too far apart to be reinforced were dismantled brick by brick as contractors repaired wiring and reinforced the building’s structural components. About 30,000 bricks have been saved, Johnston said, although some of them are broken and unusable.

On the First Avenue side, 174 and 176 have structural issues and will need to be demolished before they can be rebuilt exactly as they currently exist, Johnston said. The back of the 170 will be kept as it is today.

The facades of the second avenue will have to be reconstructed. The owners are asking for a tax allowance for historic buildings, which, if granted, would require facades to be recreated with great fidelity to their original design.

Above the four-story facade on Second Avenue, plans include the addition of floors that match the maximum building height of 80 feet for the area. These floors would be located 30 feet from the storefronts of Second Avenue and 20 feet from First Avenue, in accordance with the regulations in effect for the historic district.

Stairs would connect the 17-foot drop between Second and First Avenue, and the design of the passage would incorporate green spaces, sunlight, and space for sidewalk cafes.

Notably, the owners agreed to restrict the use of the area, prohibiting surface parking on the four properties.

The proposal is a lean version of a July plan that aimed to completely demolish buildings irreparably damaged by the blast, citing fears that weakened walls could collapse at any time, putting workers and pedestrians at risk.

These 140-year-old Victorian commercial buildings were once part of Nashville’s first trade gateway along the Cumberland River. The structures are among the oldest in Nashville, listed on the National Register of Historic Places, and are protected by the metro’s historic zoning rules due to their unique storefronts. Any demolition plan must first be approved by the nine-member Metropolitan Area Historic Zoning Commission.

If storefronts cannot be recovered, the historic protections of buildings could also be at risk.

The owners are now seeking “selective demolition” permission for 170, 172, 174 and 176 Second Ave., removing parts of the buildings that are too compromised to be saved. This type of demolition permit only allows the removal of construction parts “without structural integrity”. The remaining walls will need to be reinforced.

“We now want to move forward with a new vision for the site that will honor its history, creating something that fits perfectly with this iconic row of historic buildings and gives the impression that it has always been part of the fabric. “said Andre, owner’s representative. Callen and Heather Coleman wrote in a letter presented Monday to the Metro Historic Zoning Commission.

As recently as this week, contractors worked sealing down downspouts, repairing areas damaged by water over the years, and sealing exposed masonry walls with mortar to keep them from deteriorating further. The requested permit would allow construction crews to continue stabilizing the walls of the building and preparing them for new construction.

Ron Gobbell, who is overseeing the redevelopment as the city’s project manager, posted photographs at Thursday’s meeting of mounds of mangled debris where the iconic storefronts once stood.

Almost nine months after the recovery process began, much of the debris has been cleared away, revealing the jagged remains of the buildings’ shared walls. Some of these walls remain unstable and the city has therefore continued to keep part of the First Avenue closed to the public.

Of the 65 buildings affected by the explosion, 19 are under construction with cosmetic repairs and 10 buildings are severely damaged.

Before the explosion, these buildings housed the former spaghetti factory, Rodizio Grill, Hooters, a laser-tag company, and a tattoo parlor with upscale residential lofts on upper floors.

The proposed plan for 170, 172, 174 and 176 Second Ave. must be approved by the Planning Commission, the Historic Zoning Commission and the Metropolitan Council before work can proceed.

The plan will be presented to the Historic Zoning Commission at a specially convened meeting on October 12. It will then return to the Metro Planning Commission for a public hearing and review.

The owners said they “will explore the possibility of working with the MHZC to reconstruct the facades of Second Avenue to match their original construction if deemed financially feasible and practical.”

The owners said their proposal for the buildings was inspired by conversations with the community and a presentation from the Urban Land Institute, which recommended connecting the first and second avenues to allow easier pedestrian access to a park. riparian.

“We were excited when we saw the Urban Land Institute’s suggestion earlier this year to create a connection between First and Second Avenue that would energize both streets and open up new possibilities to take advantage of the proximity to the waterfront. the river, “Callen said in a press release Thursday.