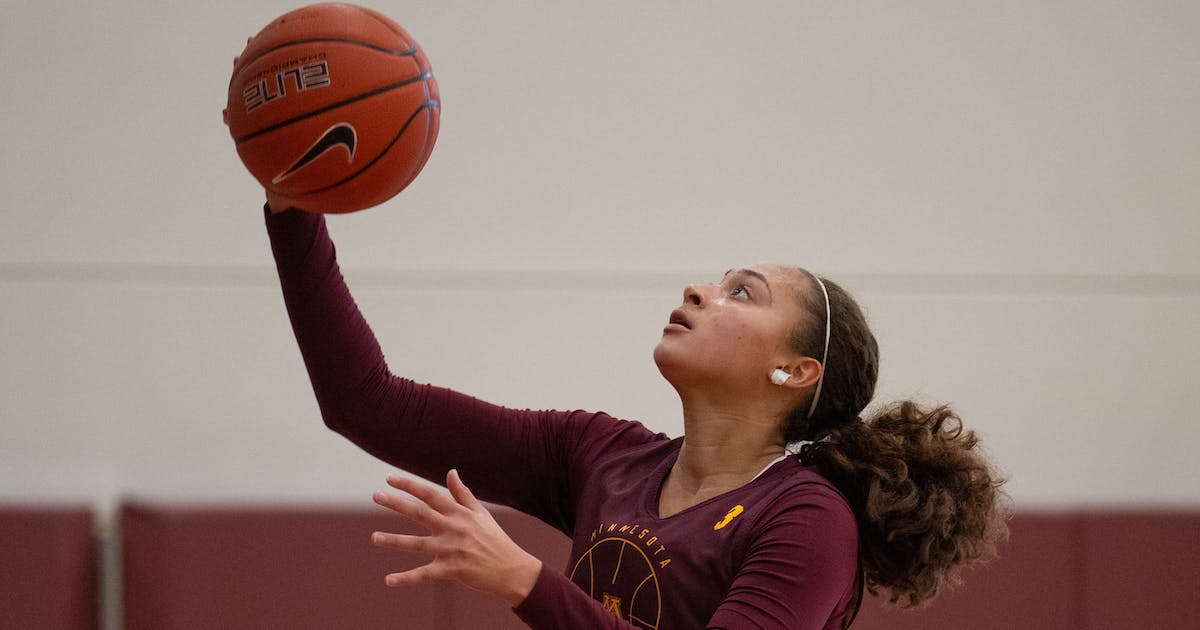 So why did this game keep Amaya Battle awake at night?

“I think about it all the time, actually,” Battle said after practice last week. Battle, from Hopkins, is part of a four-player, all-Minnesota drafting class that also includes Mallory Heyer, Mara Braun and Nia Holloway.

“In fact, if I lay down and think about it, I can’t fall asleep. It’ll keep me awake. It’s so surreal. My last name will be on a Gophers jersey. When they do that chant from Minnesota, they’re going to sing for our team. It’s so exciting. I can’t wait.

In fact, it won’t exactly be a brand new uniform that the Gopher players will be wearing ahead of Sunday’s game at 2 p.m. The team has ordered and expects to get a restyled jersey for the upcoming season — which begins against Western Illinois on Nov. 7 — but those new uniforms have been stalled by supply chain issues.

But you get the idea. For Braun, Battle and Heyer, it will be the first time. Holloway, who is recovering from knee surgery, will have to watch from the bench. But in a squad with 11 new players and just three survivors, there will be a number of players wearing the jersey with their name on the back for the first time, listening to the cheers from Williams Arena.

“I’m super excited for the game,” Heyer said. “I’ve been thinking about playing for the Gophers for a long time. The fact that I’m putting on the jersey for the first time, I’m super excited. It’s such an honor to represent Minnesota State.”

For coach Lindsay Whalen, the most important thing is to get the team used to the routine of game day: getting up early, taking part in shooting sessions, watching a movie, eating as a team. What works and what doesn’t.

“We’re lucky to play a home game,” Whalen said. “To do everything at Williams, I know a lot of our team members are thrilled with their first time there. So yeah, it’s obviously a very exciting time. We’ve been training a lot, so it will be good to go play against someone else.”

The match follows news that aid station player Aminata Zie has been lost for the season due to a leg injury. She underwent successful surgery on Thursday.

The Gophers didn’t have much depth in the position to start. This situation worsened when Holloway was lost for the year due to a knee injury. Zie’s injury only exacerbated the problem.

“Obviously you hate these guys that are out for the year,” Whalen said. “It’s really unfortunate. We have to step in. We’ve had to move people to different positions, things like that. It’s just an unfortunate part of the game.”

Sophomore Rose Micheaux is the starting center. Behind her is Destinee Oberg, a Minnesota native who was traded to the Gophers from Arkansas.

After that, the post’s minutes would likely fall on Heyer. She’s played like a four-way streak for the Gophers so far, doing much of her work on the perimeter in a high-low game with the post. But she might have to slip inside – especially on the defensive end – if circumstances call for it.

For now, however, the biggest emotion is excitement.

“It will be the first time that we will all really play together [in a game]”Bataille said.