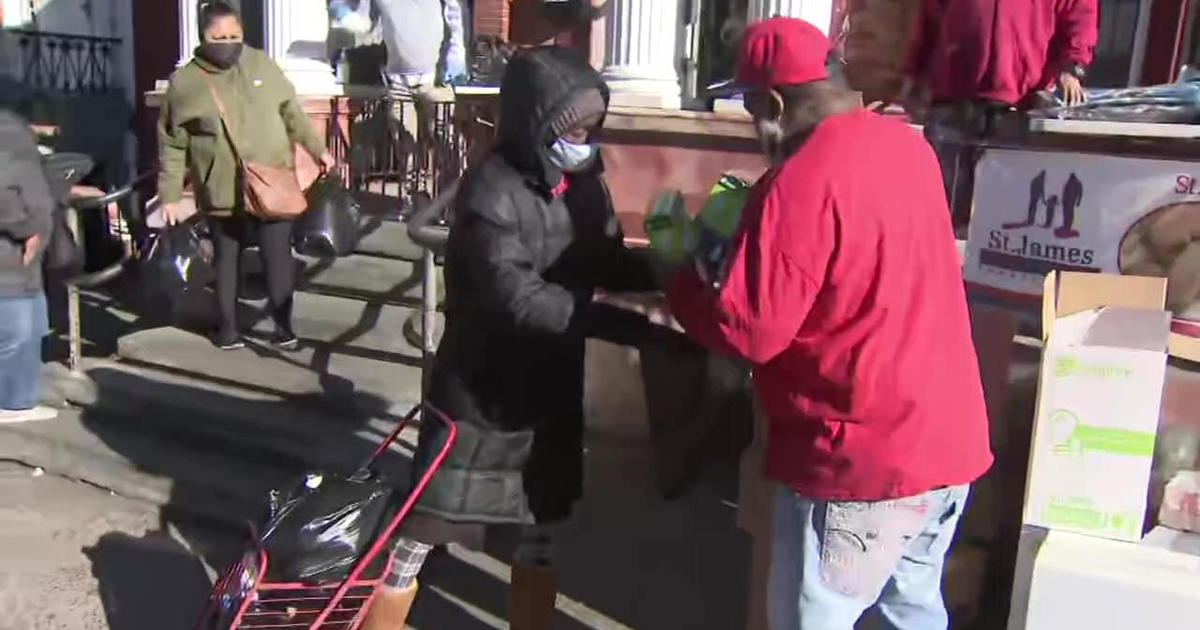 NEWARK, New Jersey — There is evidence that a local soup kitchen makes a difference in the community.

St. James Food Pantry feeds up to 125 families a day. He gets food from the Community Food Bank of New Jersey, but with rising costs, the pantry now spends $5,000 a month on meat to keep up with demand.

CBS2’s Kristine Johnson recently spent time with a mother whose life has changed for the better, in large part because she doesn’t have to worry about her kids going hungry.

Rebecca makes the trip to the St. James Food Pantry once a month.

As she unpacked bags of groceries recently, each item felt like a gift.

A surprise is popcorn mixed with a favorite chocolate treat that she knows her kids will devour.

“For me it’s the meat, the chicken. They gave two big whole chickens,” she said, adding that it will feed the whole family.

“You have that chicken and your smile when you know it’s in your freezer and available,” Johnson pointed out.

“Yeah, because, you know, the food is expensive,” Rebecca said.

It’s too expensive for her to make ends meet. She is a single mother. Pictures of her four children hang on the refrigerator door. She is also a survivor of domestic violence and works night shifts as a certified nursing assistant.

“If this service wasn’t there for you, what would life be like?” Johnson asked.

“It would be a bit difficult towards the end of the month,” said Rebecca.

This is when the bills are due and the food in the fridge and cupboards tends to run out.

Rebecca told Johnson the day they spoke that her plan was to cook dinner for her kids that night.

“Oh yeah, because they don’t come home until later. So when they come home, they get a big plate of pasta,” she said.

“It’s ministry, when you know you’re doing something to help someone else, even when we were in need, ourselves,” Clarke said.

“They help. They help a lot,” Rebecca said.

And she is grateful. Every tomato and onion she sliced ​​to make this pasta meal, even the spices to flavor the food, came from a mix of funding, donations and volunteers.

But she remembers a time when that was not the case.

“What was that feeling?” Johnson asked.

“Bad, bad. What are you going to do next? You feel really bad. Nobody wants to feel like that,” she said. “Coming here, I had a lot of hope and I pulled myself together and everything like that.

“Where I’m from, you know, domestic violence and all that kind of stuff, it really got to me that people care about it. And they want to help rebuild people,” she added. .

Kristine Johnson currently co-hosts the 5 p.m. and 11 p.m. news at the CBS-owned and operated station in New York City. She joined CBS 2 in the fall of 2006. Since then, she has received several Emmy awards.